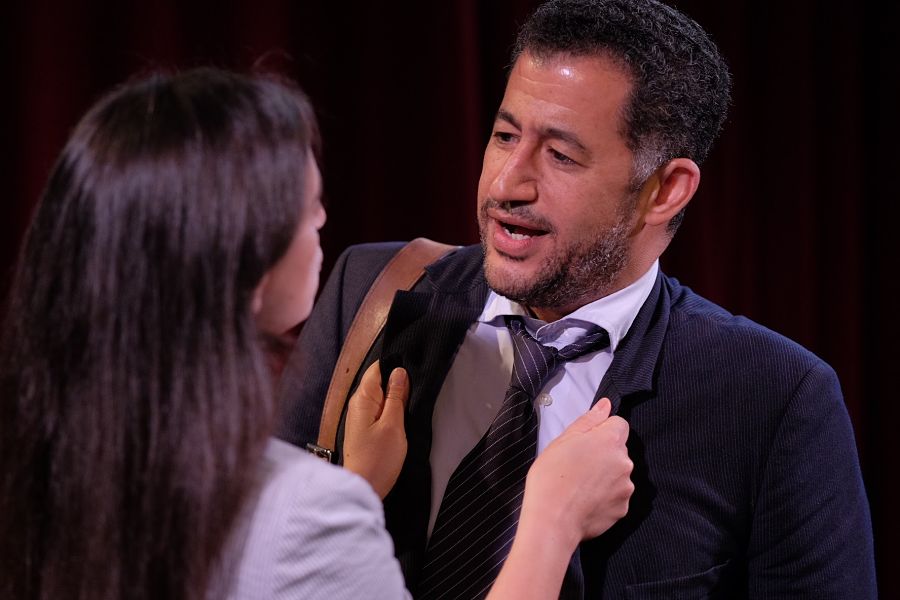 NEW YORK CITY: On Monday evening, an actor held a script and quietly recited lines on an ascending elevator. He wasn’t doing last-minute preparation for an audition—he was participating in Noor Theatre’s 48 Hour Forum. It was the 48th hour, almost curtain time, and haste was just the name of the game.

For the event, which took place at the Lark Play Development Center on May 16 and 17, 5 playwrights, 5 directors, and 20 actors turned news headlines about the Middle East into 15-minute plays in two days.

Founded in 2010, Noor Theatre has a mission to develop and produce work by American artists of Middle Eastern descent. But the 48 Hour Forum, now in its second year, brings together a group of playwrights, actors, and directors from a variety of backgrounds: This year’s writers were Kara Lee Corthron, David Zellnik, Leila Buck, Laith Nakli, and Clare Barron.

“We are being very inclusive in this process, and part of the reason for that is that over the years—both inside of Noor and outside—we found that as Middle Eastern or Arab artists, people put a lot of responsibility on our shoulders to respond to the news,” said executive director Maha Chehlaoui about the inspiration for the forum. Including a wider range of American voices makes sense since, as Chehlaoui pointed out, “America is deeply involved in what happens there, and what happens there deeply affects us here.”

The 48-hour process began on Saturday night, when the participants met for the first time. With tender topics of race and politics on the table, Chehlaoui and artistic director Lameece Issaq gave the group some ice-breakers before jumping into the writing.

“We do what we can to create a feeling of company as quickly as we can,” said Chehlaoui. The playwright-and-director pairings were made before the first meeting, but the writers selected headlines, cast sizes, and actor’s names out of a pitcher, in a process Chehlaoui likened to the Harry Potter sorting hat. Then the teams gathered to discuss the assigned headlines.

Each play was required to be 15 minutes long and include 30 seconds of either silence, music, or a character speaking another language—or all three.

Chehlaoui and Issaq’s quest to find fitting headlines for the event began months before the 48-hour timetable started.  “There is something in the way of finding a balance where we are going to a darker place, and finding articles where there is some victory,” Issaq said. For example, the company wanted to address the issue of sex trafficking and ISIS, and they chose a news article about the group of Chechen Girls who created a fake bride scam and tricked ISIS into sending them money. “There is triumph there,” laughed Issaq.

Corthron tackled the story with a play about a group of teenage girls at a slumber party. When one of the girls hacks into an ISIS message board, the group discusses how they could get rich if they offer up powerful American women to the terrorist organization. The play ends with Beyoncé’s life on the line and the outcast girl in the group making an emotional connection with an online ISIS recruiter.

As that description indicates, the forum did not require that playwrights portray the story behind their selected headline literally. Zellnik’s Politics in Bed, for instance, imaginatively addressed a story about a 12-year-old Palestinian girl who was released from jail. In his telling, a Jewish woman and her Irish-American husband have a policy of no politics at bedtime, but when the topic of the young girl’s release comes up, the couple picks apart the story to find the truth about her arrest. It concludes with the girl’s father magically appearing to tell his side of the story, then singing the couple to sleep.

Part of Buck’s Babel was inspired by a conversation the creative team had about the fine line between being cautious of suspicious activity and being ignorant of cultural differences. The play was in response to a recent headline about a college student being escorted off a plane for speaking in Arabic. In the play, a man recounts a time when he approached an MTA employee after seeing someone with a suspicious bag on the subway; he tells an old friend that he isn’t sure he did the right thing. When the man later arrives at his 5-year-old daughter’s school to pick her up, he sees a man with a gun inside the building.

While some headlines for the forum were plucked from recent events, others addressed ongoing issues in the Middle East, particularly the civil war in Syria. “It is so present for us right now, and not just this terrible refugee problem, but the bombing of hospitals—which is also happening in Afghanistan,” Issaq said. “That is the last safe space to be in a war zone. You don’t want people to forget what is actually happening in this country.”

A story about an airstrike that killed the last pediatrician in Syria sparked Nakli’s play Pediatrician, about three men who have invented a time machine. This trio—an African American, a Pakistani-American, and a Syrian refugee—has grand plans to change the course of history with their device, but when the refugee receives the news that his young brother has been injured by an airstrike in Syria, the group knows that the time machine must be used to save the child.

Inevitably for 2016, a headline about the U.S. presidential race was included in the lineup. To address Donald Trump’s proposal to ban Muslims from entering the U.S., Noor chose a headline about whether or not Trump would allow London’s newly elected Muslim mayor to visit America. In response Barron wrote a play about a TSA agent stopping a Muslim man in the airport and questioning him; the two connect over a shared feeling of fear and the experience of having their hearts recently broken. But despite their deep connection, the agent will not let the man pass through security because of policy rules.

All the plays addressed thorny issues of violence and despair with surprising degrees of lightness and humor—a reminder that theatre about even the darkest topics doesn’t have to heavy-spirited or preachy.

“It is such a way to build community and connect with so many different theatre artists,” said Issaq. While there are no plans to produce the annual event more frequently, the company hopes to introduce the 48-hour formula (not to be confused with the popular 24-hour play model) to theatres and universities to keep conversations about the news rolling.

Issaq recalled hearing from an artist who participated in last year’s forum, who was not of Middle Eastern descent, “Thank you for giving me permission to write about these things—I am just so happy to be in space where I can.” Issaq continued: “The conversations about race and appropriation are really strong in the theatre community right now. People are careful, they don’t want to appropriate and they don’t want to assume their narrative on top of our narrative. I really appreciate that kind of thoughtfulness. When you have that respect, you can go deep and have conversations. You really get somewhere where people can really hear each other.”