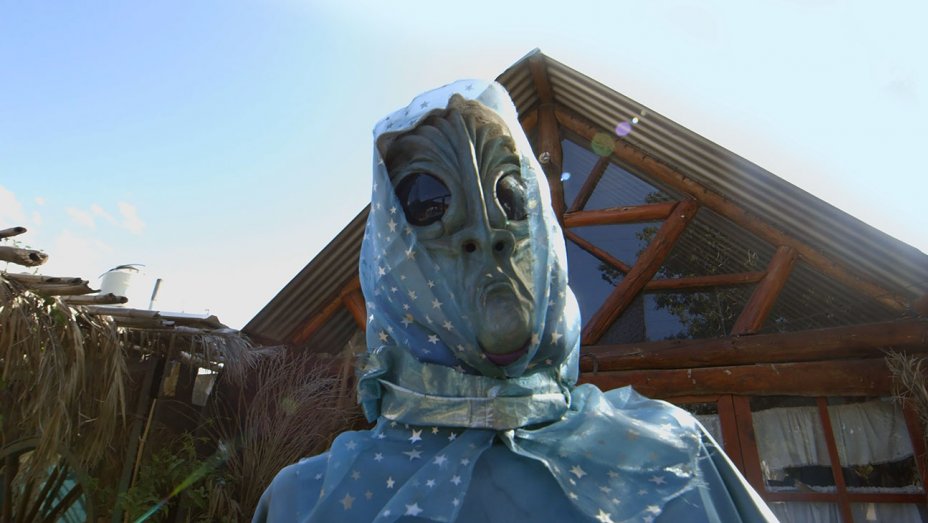 Filmmaker Bernardo Britto debuts with this doodle of a movie starring French actress Camille Rutherford as a low-fi, Edward Snowden-like fugitive in Argentina.

A flaky 25-year-old Frenchwoman claims to be in the possession of information that can “bring down governments” in Jacqueline (Argentine), the live-action debut feature from animated shorts director Bernardo Britto (2014 Sundance winner Yearbook). More of a low-fi mockumentary than a female take on the James Bonds and Jason Bournes of this world, this occasionally clever but more often exhausting trifle of a movie follows a U.S. director and two of his bumbling interns as they set out to talk to their shifty-shady subject in a ratty retreat in Argentina. They (and the audience) quickly start to question whether there is a real story there or whether Jacqueline is a French fantasist and/or a certified nutcase, with the film they are making and the one viewers are watching starting to look more and more like a questionable project. Britto and company certainly seem to have had a lot of fun while putting this together while on holiday in South America, but the final result lacks the rigor to impress as even a semi-mature calling card for the director.

Part of the problem of Jacqueline (Argentine) is that it wants to be a film of many layers but Britto doesn’t have the know-how to keep each layer legible separately, with the final result feeling messy and impenetrable rather than admirably complex and, well, layered.

The enigmatic titular lead, played by Camille Rutherford, says she stole information from her employer, the French Intelligence Agency DCRI (which ceased to exist in early 2014 but never mind). She claims to have tons of documents on a couple of flashdrives hidden in the mountains that prove that a low-level politician from the “UAR” — either the United Arab Republic, which ceased to exist over four decades ago, or perhaps the Argentinean Rugby Union? — will be assassinated in a complot that involves the CIA.

Her story is not told directly by her but filtered through the inexperience of a U.S. filmmaker (Wyatt Cenac) and his two lanky, acne-is-still-a-recent-memory interns, cameraman Jason (James Benson) and soundman Erik (Martin Anderson). Randomly recruited while he was housesitting for a friend in Miami, it is never satisfactorily explained how or why Jacqueline ended up hiring this crew of amateurs. Indeed, the three look like they would be hard-pressed to put together a decent YouTube video, let alone film the story of what could be the French and female Edward Snowden in the way Laura Poitras did in her Oscar-winning documentary Citizenfour, on which this might have been intended to be a riff.

Jacqueline (Argentine) is at its most bearable when it allows itself to be sidetracked by asides, with some of the colorful Argentinean locals offering some minor chuckles. There’s also the constant, drily delivered and occasionally funny narration from Cenac — which, perhaps unsurprisingly, occasionally recalls Britto’s own narration from Yearbook — the better to compensate for the fact the actor never actually seems present in any of the footage shot in Argentina.

The film tries to be clever about the fact that nothing much seems to happen most of the time, with phrases such as “More and more it seems like we’ve been suckered into filming a reality show.” But just naming what the audience will already be thinking doesn’t make it any more interesting. It gets especially painful when the pic tries to go meta, ruminating on filmmaking and knowledge like a stoned college student, which is where it becomes even more painfully obvious that Britto is in dire need of a co-writer and/or a producer who could structure and tame his many wild ideas and shape them into something that might actually have something to say, rather than piling one vagary on top of the other in the hope audiences will be intrigued.

Performances are as low-key as the technical contributions. And for the record: There is no production company listed in the credits, just the names of the producers.