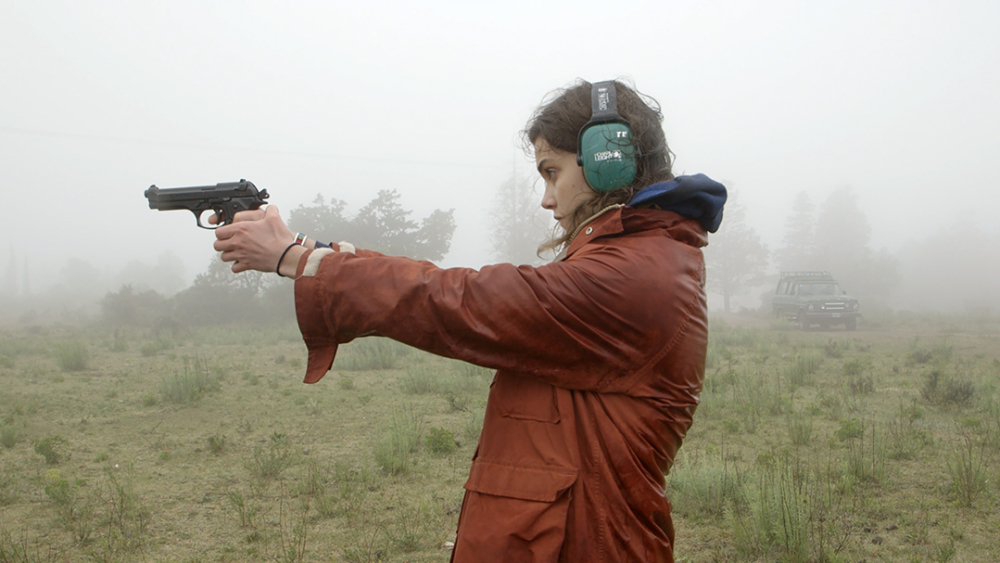 A low-level French intelligence operative hiding in Argentina offers a sensational scoop to a struggling American filmmaker in “Jacqueline (Argentine),” a feature debut from animator Bernardo Britto that gets points for originality but quickly succumbs to terminal self-amusement. Rife with moments of what look like bad improv and jokes that were probably funnier if you were there, this Sundance Institute-shepherded movie couches its own lack of follow-through as shaggy-dog absurdism. The topical hook and intriguing, Snowden-esque heroine are ultimately red herrings; the primary audience is right there on the screen.The film is narrated by “the director” (Wyatt Cenac), who, with a background in short docs, experimental films and a failed studio project, is summoned from Miami to the remote Argentine town of La Falda, where the 25-year-old Jacqueline (Camille Rutherford, “Blue Is the Warmest Color”) has been hiding. She claims to have evidence from her job of the impending assassination of a Middle Eastern politician. All the major news outlets have ignored her — and indeed, there’s some question as to why she’s tapped a filmmaker as insignificant as this one. The director and his two crew members’ arrival in Argentina begins ominously enough: The bag that has their camera equipment never turns up. Soon there other ominous signs, like the recurring sight of dead dogs in La Falda streets. (Britto and Co. apparently found them on site; the movie’s nonfiction travelogue elements are among the pic’s more interesting qualities.)

But the documentary-within-the-film is soon sidetracked with hang-gliding and other local diversions. Although Cenac’s character finds that Jacqueline has a great screen presence (Rutherford, whether hiking, eating breakfast, or explaining what she’s doing on a computer in cutely French-accented exposition, is basically tasked with carrying Britto’s movie), she seems suspiciously unforthcoming about providing evidence for her story, leaving her director with the sense that he’s been “suckered into filming a reality show.” There is one moment halfway through, in which Cenac (or, really, Britto) tracks Jacqueline as she takes her morning jog, in which “Jacqueline (Argentine)” flirts with becoming a more suspenseful piece of moviemaking.

But the second half is also a willfully go-nowhere affair, with Cenac’s character waxing philosophical about how things aren’t adding up. None of this would be a problem if it seemed as though Britto had something compelling to say, but “Jacqueline (Argentine)” ultimately trivializes its allusions to world affairs. The attempted tone is probably somewhere in the ballpark of Hal Hartley’s “Fay Grim,” which also treated the prospect of an international conspiracy as a big joke, but Britto’s writing simply isn’t up to the task.

Tech credits are rudimentary by design and, probably, by necessity. Much of the film is meant to appear as though it were lensed from Cenac’s point of view, even though it’s pretty clear that the actor wasn’t present for most of the shooting; the voiceover was simply added later. (The character even “explains” why he didn’t film his introduction to Jacqueline: “Sometimes you just drop the ball.”) There are occasional tricks — through editing and sound — to make it seem as though Cenac were there.